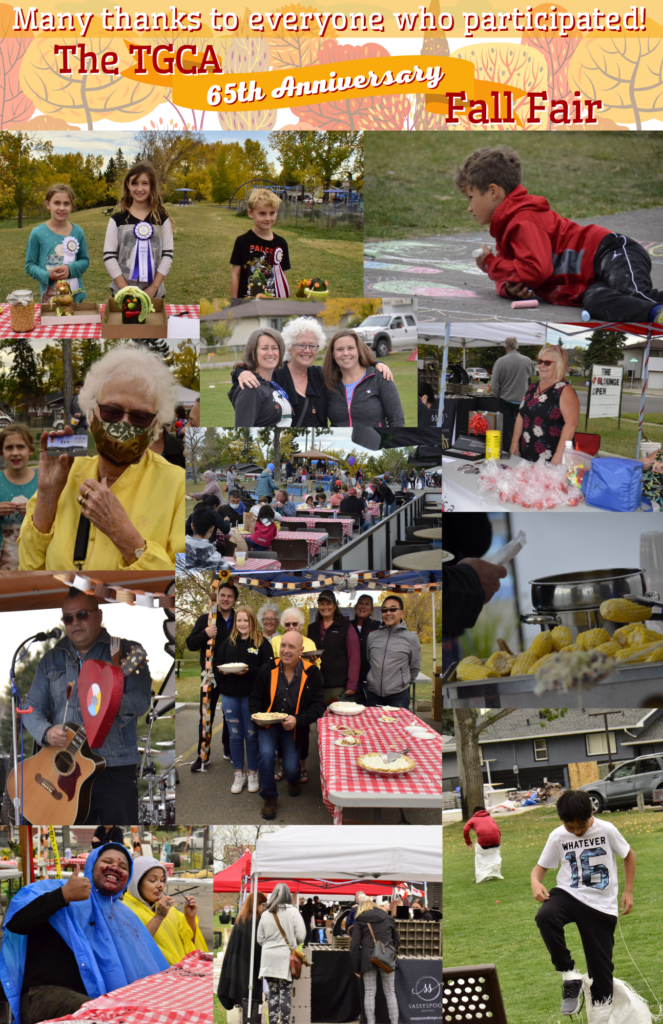 The TGCA 65th Anniversary Fall Fair was a great chance to get together again!

Thanks so much to everyone who came out and participated in the TGCA 65th Anniversary Fall Fair!

Families, friends, and local businesses and entrepreneurs came together on Saturday for the fair and the weather cooperated too! The Fall Fair was a wonderful way to celebrate 65 years of community building at the TGCA and everyone that lives and works here in Thorncliffe and Greenview.

Among the visitors were folks that were just discovering the centre and those who have been members for decades. The TGCA is very pleased to be able to serve the community with an outdoor event like this one, particularly during these times that can feel so divisive.

Curt Young played an acoustic set to start off the day and recounted stories of learning more about his aboriginal heritage for the audience. There was a live band, local rockers SwayBack, and although there were some technical difficulties, the rock n roll covers were enjoyed by all.

A delicious lunch was provided free of charge by the board and they enjoyed serving up the pulled pork on a bun, coleslaw and corn on the cob with gobs of butter. No doubt, it was a great way to get the afternoon started.

The market and food trucks were well attended and many of the vendors said they enjoyed the event and all the visitors. There were lots of folks meandering about with buckets of mini-donuts and ice cream from the Mini-donuts Canada and Vanilla Bean Ice Cream food trucks. The TGCA also had some wonderful volunteers making and handing out popcorn and cotton candy too!

For the local history buffs, there was a detailed Thorncliffe Greenview area history exhibit in the contest tent. Expect to see the continuation of this detailed project in the future. While those who wanted to know more about the advantages of living in Thorncliffe and Greenview had a chance to view the TG Advantage display, which outlined the assets and highlights of our awesome neighbourhood.

The contests were a success and plenty of prizes were awarded! The pie eating contest was a riot and the winners worked hard for their winnings. The kids’ crazy veggie contest had just enough entries that everyone took home a prize and the Autumn Garden Bouquet got some wonderful entries too. Sean Chu and Jeremy Nixon were on hand as judges in the Pie Baking contest and the judges were almost as lucky as the contestants for that one! Yum! There were quite a few entries for the photo contest and the winners were announced at the Rock n Roll Bingo on The 56 patio.

There was a playground recelebration with balloons and sidewalk chalk and then kids’ activities like egg on a spoon races and sack races too. The kids were having a great time from the beginning of the day until the very end.

We’d like to heartily thank the volunteers who pitched in to make this event a success. Without help from our volunteers, events like this are very difficult to run, so thanks so very much!! We hope that you had a good time.

We’d also like to thank the following grocers in the area for donating supplies for all of the contests and activities. Thanks so very much to the following: Hunterhorn Save On Foods, Superstore, Thorncliffe Shoppers Drug Mart, Thorncliffe Safeway and IDA.

And of course, we’d like to thank our event sponsors and participating business members:

Programming and Community Engagement Coordinator at the TGCA, v.gillard@tgcacalgary.com